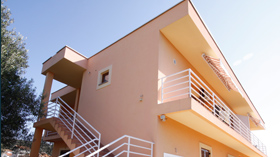 The Kornati National Park covers the bigger part of the Kornati waters. Because of their exceptional landscape beauty, interesting geomorphology, highly jagged and indented coast as well as because of rich communities of the submarine eco-system, the islands were made a national park in 1980.

Telašćica bay is situated in the central part of the eastern Adriatic coast, in the SE part of the island of Dugi otok. Thanks to its extreme beauty, richness and importance, this bay surrounded by 13 islands and islets, together with 6 islets inside the bay of Telašćica itself, was proclaimed a Nature Park in 1988. Thanks to its exceptionally valuable plant and animal life, geological and geomorphologic phenomena, valuable colonies of the sea bottom and interesting archaeological heritage this area became protected in 1980.

Extending between highest peak of the Mt.Velebit (Vaganski vrh, 1758 m) and the Adriatic sea coast, over an area of 95 sq km, there is the National Park of Paklenica. It's major attractions are the monumental canyons of Velika and Mala Paklenica.

Because it is one of the rare natural habitats of waterbirds as well as because of its fresh water springs and biodiversity, the Vrana Lake and its surroundings have been declared a nature park on July 21st, 1999. The park's limits are between Pirovac and Pakoštane.